Rope, Patrick Hamilton’s 1929 psycho-thriller of a play now knocking ’em dead at Bag&Baggage in Hillsboro, begins with the charming and affable pair Wyndham and Granillo. You never meet a sociopath you don’t like, at first. They’re students at Oxford: two well-groomed petty aristocrats in tailored suits, the medium haircut, buffed, shined, and whistled Florsheim shoes, and the brisk posture of purpose. It’s Britain between the wars, I and II, when the delicate crucible of tradition and history are going to collide.

Their apartment boasts a wireless radio, full bar, and antiques collected for their curio cabinets from travels abroad, including a stuffed and posed armadillo. It’s an odd collection that makes a painting of the end of the British Empire: their personal museum is a kind of theft and ramshackle display of power, without connection. The attachment is in the owning. In the center of their apartment is a large wooden chest, the top held closed by a heavy padlock. There is also a grandfather clock, which keeps a steady time and adds to the audience’s anxiety. 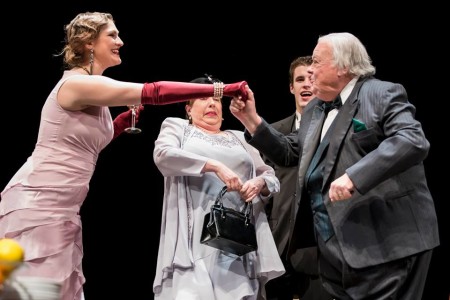 Wyndham, as played by Trevor Jackson, cuts a lithe figure reminiscent of the poet W.B. Yeats: the overly thin but figurative messenger with the sometimes tousled black hair. Granillo (Nathan Dunkin) is the staunch, pouty-faced, old guard Englishman, hiding behind the image of the Tory Party to secure his deviance. It’s apparent they share a living space. Very soon we realize that Wyndham and Granillo share much more, and a tug-of-war is going on: Granillo is the conscience, Wynham is the action. They sit side by side, but Wyndham is the man of the house, winning all the arguments and putting Granillo, as a caricature of the past, in his place. They have shared a bed, but not much more, as we assume. Granillo tries for affection, to at the very least hold a hand. Wyndham denies him, always purposeful, always cutting to the chase.

Unlike most psychological thrillers, in the first few minutes of the play we learn that Wyndham and Granillo have killed a man, a fellow student at Oxford. The crime is solved. They’ve killed for the purpose of killing, for a thrill, to live dangerously, to commit the perfect crime and prove that a super-man can assume the destiny of any person. Rope is based loosely on the true of case of Leopold and Loeb, a scandal from almost 100 years ago, and we have to assume the tide of history hasn’t changed. Hamilton wrote well and suspensefully, and his characters and questions about violence could as easily come out of today’s news feeds.

In Rope, Wyndham is riding high on the vanity of having murdered Ronald Johnstone with Granillo.  Pushing for an even greater achievement, he’s invited a group of friends over to their apartment for dinner, which will be laid out on top of the chest that coffins Ronald’s body. The murder is now a work of art and a secret spectacle. Wyndham has carefully chosen a collection of people to unknowingly celebrate the perfect crime. Kenneth (Joel Patrick Durham) is an innocent and jocular classmate. Leila (Signe Larsen) is an young alluring, upper crust woman with whom Wyndham is hoping to distract Kenneth. The most import of Wyndham and Granillo’s guests is Ronald Johnstone’s father, whom they invite on the pretense of looking over their library. Sir Johnstone’s wife rarely goes out, so Wyndham has thumbed Johnstone’s matronly and skittish sister, Mrs. Debenham (Victoria Blake) to accompany her brother. Rupert Cadell (Michael Tuefel), an older friend and writer, is the last to arrive. To keep pace with the ticking of the clock, Wyndham and Granillo’s butler, the Frenchman Sabot (Alec Lugo) moves in circles around the stage, setting, collecting and arranging the evening’s meal and moving the guests along to the final hour. Lugo’s French accent is vague-sounding, but it comes off as an Inspector Clousseau device. After dinner, Wyndham and Granillo are going to drive in a rainstorm at midnight up to Oxford, not only to return to studies, but to “disappear” the body.

If you met Kenneth and Leila at a party, you’d be lured by their infectious optimism, good intentions and childlike laughter. But, very soon you’d regret the introduction: their one-sided conversation, mood, and repetitious clinging to in-vogue catch phrases is monotonous. But there is life, and there is theater. What in real life would be plain annoying adds onstage to the background hum of the clock, the staccato pinpoints that each character assumes as the story plays out. They’re the most important guests: as Wyndham assumes Kenneth and Leila will give the evening a playful and entertaining opaque spin, they become the pair who solve the crime before it is discovered. Blake and Durham are shamelessly silly, and well enough drawn to be believable.

Rope‘s director, Rusty Tennant, creates a tension between the well-assembled set and the cast of opposing characters. Hamilton’s deft writing allows Tennant to explore the play’s over-the-top, boisterous personalities against their more timid (but not meek) counterparts with a sense of humor. Rope is about shadows and light, silence and noise, living and dying. It calls for abrupt ends of acts, a technique familiar from later crime serial shows such as Dragnet. Tennant highlights these well, creating a pendulum-swing between suspense and campy humor to ease the darker corners of the play. In a stylized layering of the apartment space, six lights varying from chandeliers to the academic’s green-glass desk lamp fill the stage from every direction. Tennant plays with their possibilities, clicking each one on and off of in a syncopation with the timing of the story, emphasizing each character’s polestar moment.

While Ronald Johnstone – the central character to the plot, if not the action – lies dead in the locked chest in the middle of the apartment, Rope hangs on Michael Tuefel’s portrayal of Rupert Cadell. Rupert is Wyndham and Granillo’s former teacher, an admired poet and veteran of WWI with a bum leg. He’s got the black sarcasm of a well-refined gay man, never losing his grace as he constantly shifts his weight to make up for his lack of physical mobility. His walking cane is more a fashion accessory than a necessary third leg. Tuefel shifts between bone-dry, cutting asides and impassioned monologues that stir the nervous energy to the surface. He’s the foil who gives the audience its biggest laughs by stating Wyndham and Granillo’s obvious character flaws, and Kenneth and Leila’s out-to-lunch intellects, with Oscar Wilde-like endearments. His serious inquests about Wyndham and Granillo’s motives in inviting the group to this weird-hour, strangely arranged dinner party provide a mouth and head full to chew on. He almost comes off edge: we see the internal dialogue of Rupert’s inner grief, which Hamilton was famous for, a kind of Existential crisis of the European continent. For people philosophically bent, Rope is a candy store of references to Proudhon, Aldous Huxley’s Encyclopedia of Pacifism, and the main man of the night, Frederich Nietzsche. Under the influence of Hamilton’s incisive pen, Teufel’s vibrant acting, Tennant’s direction, and the chemistry among the actors, the monologues come off not as sermonettes but as quick and attractive explorations of anxiety and loss in the modern era.

Hamilton’s two most popular plays, Rope and Gas Light, were made into films a number of times, but most famously by Alfred Hitchcock. Hamilton had fallen into eclipse toward the end of his too-short life. A notorious drunk who hurried his death by finishing off three bottles of whisky a day, he was the son of two writers, with distant British aristocratic relatives. But he grew up, due to his father’s own drinking, always on the edge of poverty. Hamilton was a mess of personal contradictions: made wealthy and famous while young, married twice but never consummating his relationships, frequenting prostitutes, spending most of his days and nights in pubs. His bitterness and alcoholism stripped his later novels, but for most of his career he wrote a legacy of the inner lives of working-class and on-the-fringe Britons. In Hamilton’s best written moments, he was a son of Charles Dickens and the father of John Fante.

Bag&Baggage gives a good taste of Hamilton, and the sort of thing this interesting company can do well. Unlike the film versions of Rope, the play is funnier, more anxious, and better thought out. The audience laughed and lay in suspension for all three acts. You will, too.