Witch hunts & fitting in: from Salem to Iran, the pressure to conform

An Iranian-American girl, a gay man, and an ex-Seventh-day Adventist sit down for a chat at the Venetian Theater Bar.

The girl says, “When I visit my family in Iran, I dress in full hijab to stay out of trouble.”

“Depending where we travel, my partner and I pretend we’re just friends,” replies the gay man.

Meanwhile, the ex-SDA has ducked under their table, whispering, “I probably shouldn’t be seen in a bar or a theater, let alone BOTH!”*

All kidding aside, this is the gist of a conversation I had last week with Bag & Baggage artistic director Scott Palmer and Hillsboro High School student actor/”Professional Development” program participant Melory Mirashrafi (pictured, lower left) at a rehearsal of The Crucible, which opens tomorrow. And I think what we were all getting at was that even though the original Salem witch trials have slipped into the mists of history, each of us has had a taste of the kind of societal scrutiny that (unfortunately) keeps the witch hunt premise fresh. The need to conform, and the threat of consequences if you don’t, is everywhere. 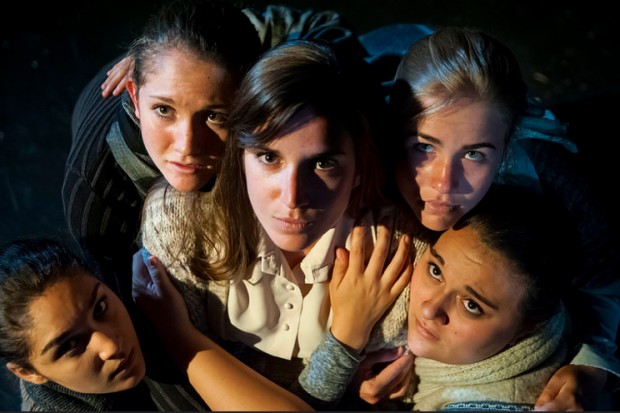 Crucible playwright Arthur Miller most certainly got his dose of the poison in 1947 when he was accused of being a communist and called to testify before the House Un-American Activities Committee. When he refused to name his alleged fellow “reds,” he was held in contempt of Congress.

Organized religion, zealous corporate culture, government spying, and small-town snooping—all done in the name of community standards— each has the potential to escalate into witch hunts. Anyone at any time could be unfairly singled out, accused, tried without due process, and painfully punished for a minor or nonexistent offense. There’s also an unspoken consensus that the quickest way to become a target is to stand out for unusual behavior, from what you wear, to when you come and go, what you eat and drink, with whom you consort. Even countercultures, self-defined by their difference from the mainstream, often crack down on their members for supposed deviations from their own standards. (Even anarchist groups purportedly put some participants on “trial”; even theme camps at Burning Man keep members in check.)  The Crucible‘s relevance endures because humans continue to police one another socially and religiously without due process or proof, to falsely accuse and speculate, to punish and politic.  The story also sorts its townfolk into a pretty universal set of witch-hunt behaviors, beliefs and allegiances.

First you need a burgeoning mob of accusers, like The Crucible‘s herd of hysterical young girls and the townsfolk and court officials that they quickly convince of their accusations. Some accusers, like the girls, point the finger to deflect suspicion from their own wrongdoing and then begin to believe their own BS; a few like Ann Putnam irrationally blame the accused for their own random misfortunes; some, like Abigail Williams and the Reverend Parris, act in their own self-interest, standing to gain whatever the accused lose; some, like the Reverend Hale and Mary Warren, are well-meaning wafflers who change their mind about charges;  and some like Judge Danforth, initially convict and then refuse to consider new evidence, letting their own stubbornness and pride trump the search for truth. Then you have the trajectory of accusation—starting with outliers. Notes Palmer, “The first people Abigail accuses are already seen as nuisances in their village. They’re homeless, drunk, or promiscuous, so nobody defends them.” Eventually, if a hungry witch trial keeps seeking new blood, it’ll accidentally raise the hackles of some obnoxiously defensive but technically correct citizens, like Giles Corey and John and Elizabeth Proctor; and eventually sweep up some mild-mannered martyrs like Rebecca Nurse, whereupon the movement may start to fall out of public favor. “It’s a turning point, because they have good standing in their community,” explains Palmer.

The stark colonial melodrama contrasts sharply with the company’s airy, stylish summer fare (a sporty Italian version of Love’s Labour’s Lost), and Palmer admits that, at least initially, it was harder for actors to relate to. That’s where Mirashrafi’s insights have been helpful to her castmates. Unlike your typical Hillsboro high-schooler, she travels to Iran about once a year and has observed—in both senses of the word—the strict rules enforced by the Muslim “religious police.” Her contemporary firsthand accounts of Iran’s theocracy have helped the cast empathize with their Puritan characters.

She describes, for instance, the ongoing tug-of-war between women’s fashions and Iran’s standards of modesty:

“For a while, everyone started getting elaborate manicures, but then that became outlawed and they were fined for every painted fingernail. Then, [since a hijab covers the head at or around the hairline] there was a ridiculous trend of piling your hair up in a giant bun right at the top of your head, so the cloth stuck up in a mound. Last season when I was there, everyone was wearing those really brightly patterned leggings, but they’ve since been banned, too.”

She also mentions Iran’s general moratorium on what many people would consider good clean fun:

“Some Iranian teens recorded a viral video [as people around the world were doing] singing and dancing to Pharrel’s ‘Happy.’ They got in big trouble for it.”

High schoolers may be used to having their self-expression monitored and punished, but in Iran, getting in “big trouble” often means incarceration or corporal punishment, e. g. flogging. And even those penalties don’t carry the same weight that The Crucible‘s characters face.

“The stakes are literally life-or-death!” Palmer exclaims. “Many of these actors are approaching this text from a place of relative privilege, and they find it nearly impossible to imagine what it would be like to have your life threatened.”

Nevertheless, by using a variety of suspense-building techniques and physical exercises with tensed muscles and held breath, they’ve been able to embody their characters’ mortal desperation. The group of girls has also worked separately with AD and acting coach Cassie Greer to develop an elaborate back-story for their secretive societal deviance. For a cast that’s still half in high school, this is serious craft. “In most productions, actors who play the ‘teens’ are, like, 32,” says Palmer. “But we put these kids through their paces.”

As Bag ‘n’ Baggage’s The Crucible faces its day in court, we’re at least confident that they understand the charges.

The Crucible runs September 5 through 28. For more on the play’s theory and ramifications, catch Palmer’s pre-show lecture, “Fear is the Cause; Fear is the Tool,” and/or subsequent talks in theMagazine Series.

*Though modern Adventists dabble in drama, traditional tenets forbid it.

A. L. Adams also writes for Artslandia Magazine and The Portland Mercury.
She is the former arts editor of Portland Monthly Magazine.