Bag&Baggage Productions’ staging of Orson Welles’s ‘Moby-Dick, Rehearsed’ is a qualified triumph of imagination over obsession

“Moby-Dick isn’t a novel, it is an entire imaginative world. It is massive, bulky, colossal, terrifying, majestic and ultimately unfathomable. It is the physical representation of one man’s will, one artist’s transcendent vision, an entire internal universe externalized…”

So writes Bag & Baggage productions artistic director Scott Palmer on the company blog. Of course, the “one man” he’s referring to is author Herman Melville, who transformed his own obsession with the particulars of whaling and the fictional obsession of a foolhardy sea captain, Ahab, into the 1851 epic that eventually (though not initially) came to be regarded as an American classic.

But obsession and imagination also describe Ahab himself, obsessed by a whale and the manifold metaphors it represents, not to mention the minutiae of whaling. They characterize the great American film director Orson Welles, obsessed (as he was by so many other hugely ambitious projects he started but never quite pulled off) by Melville’s novel, which he spent years transforming into the play, Moby Dick, Rehearsed, which the company is staging at Hillsboro’s Venetian Theatre this month. They also apply to Palmer, one of Oregon’s and perhaps America’s most artistically ambitious theater artists, himself.

“Who in their right mind would decide that Moby Dick was appropriate source material for a play? Only a maniacal genius like Orson Welles, really. B&B has a long history of doing staged adaptations of American novels, and this just felt like such a perfect fit for us and our style of work,” Palmer said in a question & answer interview on the B&B websit. “That unapologetic ambition, that willingness to take a massive risk and potentially fail spectacularly — that feels very Bag&Baggage to me.” You might say Palmer is obsessed with transforming unlikely material, from Shakespeare’s worst plays to Arthur Miller’s weighty The Crucible and many others, into stage triumphs. He usually succeeds. 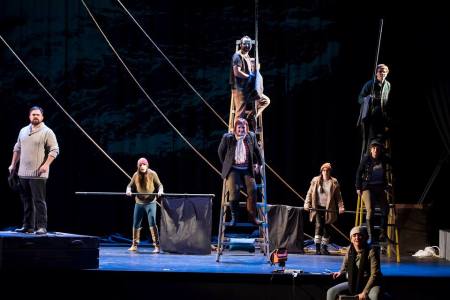 Neither Ahab nor Melville nor Welles nor Palmer let the challenges of their tasks daunt them. Ahab caught his prey, but it cost him his life and those of his crew. Melville’s novel was widely regarded as a crazy failure in its time, and its overabundance of non dramatic material still repels many readers, though it ultimately found the wider popularity that didn’t matter to Ahab or maybe even to Welles (in this project at least) except insofar as getting others to buy into their obsessions would help them achieve them. Trying to turn so inward-gazing a novel as Moby Dick into compelling stage drama is hunting a white whale; as Palmer acknowledged in a pre-show talk, it’s perhaps a good thing that Welles devoted himself to filmmaking rather than playwriting.

In nevertheless choosing to stage Welles’s folly (in his centennial year), Palmer again plays the white knight, this time trying to save the white whale. Does he catch the object of his obsession in this new production and redeem Welles’s hubristic vision? Like the others, it’s a foredoomed, magnificent failure that, if you can stick with it long enough, you ultimately can’t let go of.

Welles and whales are in the air (waters?) of late: Portland Experimental Theatre Ensemble’s season-long serial [or, the whale], Portland Story Theater’s The Essex, Ron Howard’s movie In the Heart of the Sea, the Northwest Film Center’s Welles-fest, a reading of excerpts from the novel at Portland’s Mother Foucault’s bookshop, AnyWhen Ensemble’s “Boldly Launched,” which I saw the same weekend as MD,R, a couple days before I caught Welles’s Chimes at Midnight at Cinema 21.

Moby’s basic plot seems superficially dramatic enough (spoiler alert for readers who never made it past the whaling minutiae): Ahab loses leg to great white whale he’s trying to harpoon, becomes obsessed with revenge, turns his next ship, the Pequod, and its crew into his instruments, refuses to give up his quest even to help save the lives of crew members from another ship, catches up to the whale, harpoons him, and then is dragged to the watery deep along with the rest of the crew except for the sole survivor and narrator, Ishmael.

But of course there’s much more to Moby than that, which is why it’s been studied so, well, obsessively for decades. Unfortunately, much of the psychological and metaphorical exploration that makes it powerful doesn’t necessarily work onstage, maybe not even with today’s CGI tech onscreen.

But as Palmer noted, the immense difficulty and perhaps impossibility of realizing Melville’s vision onstage didn’t deter an artist as obsessive as Orson Welles, who’d taken on the press baron, producers, and studios who controlled early American cinema in his various projects, from Citizen Kane onward. He took acting jobs to finance his directorial ambitions, including appearing as Father Mapple in John Huston’s 1955 film version of Moby-Dick and as King Lear in a stage production. As Palmer and others have noted, Welles had good reason to divine traces of Lear in Moby as his and Palmer’s soliloquy-soaked productions reflect. 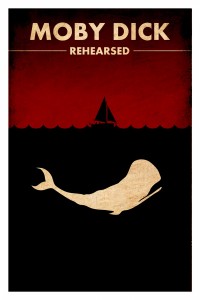 What Welles didn’t have was money, but again, he didn’t let that stop him. Instead of making an expensive film, he’d make a play, and instead of impossibly expensive Lloyd Weberian stage magic, he’d let the audience’s imagination do most of the work. Praised less for its dramatic coherence or even his own (reputedly hammy) acting than for its imaginatively minimal staging, Welles’s Lear-ing original production somehow evoked enormous detail from a few bare bones (both prop/set-wise and in the stripped-down remnants of the novel, most of which Welles jettisoned). In Bag & Baggage’s inventive production, too, we imagine a ship, a whale, storms, and the rest without a single glimpse of fluke or fin.

Welles justified the minimalism by ingeniously creating a contrivance: instead of showing us Moby-Dick, he’d pull back a level and show us the story of a troupe of actors rehearsing Moby-Dick. You don’t need a whale or even much of a set for that. It’s not even a dress rehearsal, but instead an impromptu first read through when the imperious actor playing King Lear in what was supposed to be a production of that play suddenly decides to have the company pull a Moby instead. So we apparently have two stories: the characters hunting the whale and actors rehearsing the show.

All very meta and characteristic of the time, this device makes a virtue of necessity by obviating the need for expensive props while underlining Welles’s connection between Lear and Moby. Just as the actors come together to follow their leader from Shakespeare into Melville, so do Ahab’s sailors follow him on his doomed quest. Many plays and films, like Noises Off have made much of the comic/ dramatic tension between what’s happening onstage and what’s going on backstage — something Bag & Baggage does well.

But none of that happens in Welles’s script. We get the rehearsal, and then we’re in 19th century Nantucket. Despite some declamations on the value of theater (including some sly local references), the rehearsal device just feels like a contrivance. The fundamental flaw in Welles’s vision is that there’s no real dramatic reason for the rehearsal frame. Which in turn becalms much of the first half of this show.

It’s puzzling that one of the only forays into original playwriting by the most theatrical of filmmakers feels so leaden in its wayward first half. A child magician, “Welles was obsessed with the trickery and illusion possible, even inherent, in moviemaking,” ArtsWatch’s Marc Mohan observed recently, and the master illusionist thought he could also magic his way to getting support for his ambitious visions. But deprived of his greatest skill — still-dazzling visual compositions made possible by cameras — Welles flounders.

Fortunately, Palmer and his team compensate for the absence of Welles’ fabled camerawork with one of the most impressive productions Bag & Baggage has yet offered, somehow convincingly conjuring a rehearsal stage, seaport, church, whaling vessel and, yes, even Moby himself out of a few ropes, chairs, projected backdrops, wooden blocks and boxes — and our own carefully cultivated imaginations. The setting magically swerves from a modern rehearsal stage to the Pequod deck. Kudos to stage manager/props mistress Emily Trimble, scenic designer Megan Wilkerson, lighting designer Molly Stowe, tech director Nate Patterson, and the rest of the crack crew.

Direction is equally masterful. Palmer deftly deploys his forces throughout the theater, including the aisles, with stage directions shouted from behind the audience in the rehearsal sequences; Arianne Jacques’s comic turns as the stage manager goose things along. Wrenching scene shifts (cabin, map room, deck, seaside venues) keep the mood changing frequently and our interest from flagging. Not surprisingly, given Palmer’s expertise in matters Bardish, the Shakespearean elements shine without becoming pedantic.

Music (unscripted) contributes mightily. A cappella sea shanteys (very well sung, led by the sturdy voices of Cassie Greer and Peter Schuyler) garnished with touches of actor-played percussion and occasional guitar not only serve the functional need to cover transitions, but also add substantial texture and emotional impact, humanizing the crew and underscoring the ties that bind them in the face of their leader’s demented direction.

As usual, the chemistry Bag & Baggage’s company has developed makes the ensemble uncommonly strong from top to bottom. They’ve so internalized Palmer’s particular brand of expressive acting that everywhere you look, even in minor characters, something compelling is happening, especially in the second half, when the show sheds the needless frame, gets down to the onboard action, and really surges to life. 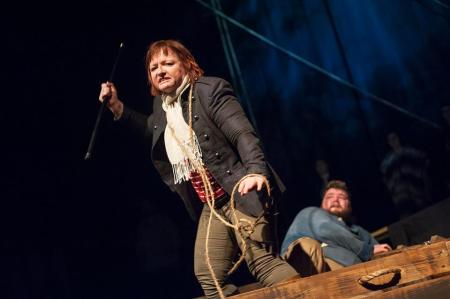 Here (as earlier in the Mapple role that Welles also played), veteran actress but Portland and Bag & Baggage newcomer Kymberli Colbourne — the first woman to play Ahab in Welles’s play, thanks to special permission from his estate — creates a convincing portrait of obsession in just a few carefully rendered scenes. As Colbourne stalks the deck, her face and body project the essence of the crazy captain’s abrasive obsession and also portray (without contradiction) his persuasive force of personality. While it’s difficult to escape Orson’s sizable shadow in roles so evidently created for himself, Colbourne’s implacable Ahab is at once infuriating yet charming enough to convey why the crew follows him to their doom — just as Welles notoriously seduced so many into joining and even bankrolling his schemes.

Colbourne and the other actresses playing pants roles are uniformly persuasive, but the gender switch alone brought few insights, except maybe to reaffirm Bag & Baggage’s deserved reputation as an equal opportunity company whose actors and production crew, of all genders, excel.

It’s the company’s acting, directing and production contributions that keep Moby Dick, Rehearsed from being pulled under with Welles, Ahab and the rest. Like Melville’s novel, if not Ahab’s and Welles’s respective quests, Bag & Baggage’s production ultimately surmounts a preposterous concept and a shaky launch to achieve (partial) redemption for its flawed source. For those who don’t abandon ship during the tedious part of the voyage, Palmer & Co.’s imagination redeems their obsession.