“Six Gentlepersons of Verona” gets groovy with un-famous Shakespeare

At the talkback session after Sunday’s matinee performance of Six Gentlepersons of Verona, an audience member asked director Scott Palmer why he wanted to stage a play that’s widely considered — including, according to his program notes, Palmer himself — to be among Shakespeare’s weakest.

“Because I wanted to!” grinned Bag & Baggage Productions’ artistic director, a confessed Shakespeare geek who enjoys nothing more than poring through historical source material and approaching the plays from novel directions. He elaborated: like many directors, Palmer wants to get through Shakespeare’s entire canon (much as conductors crave complete Beethoven or Mahler symphony cycles or Wagner’s Ring operas); Verona, possibly Shakespeare’s earliest comedy, contains the seeds and even some of the plot devices of his later masterpieces (a balcony scene a la Romeo and Juliet, transformative encounters in the woods like in A Midsummer Night’s Dream and others, a pre-Othello jealousy plot); its very dramatic weaknesses pose a challenge that any ambitious director wants to solve, and so on.

All good reasons … for a director. But what about the audience? Why should we pay a farthing to sit through a couple hours of second-rate Shakespeare? Are we mere canon-fodder? 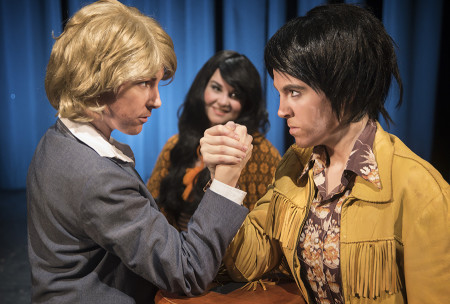 To begin with, this Six Gentlepersons isn’t entirely early Shakespeare, but a rewrite of a rewrite. Probably because of its abundant dramatic flaws, Shakespeare’s Two Gentlemen of Verona, one of his earliest attempts at writing  a comedy, was never staged in his lifetime. For whatever reason, Shakespeare (or whoever wrote it — even the Bard’s actual contribution to the script is lost to history) had to pad the plot with material he’d originally written for an aborted play about Robin Hood, Palmer explained in his post-show talk. The manager of the London theatre that premiered it in 1763, 150 years after  Shakespeare died, made severe changes, which Palmer used (along others made by another 18th century adapter) as a basis for his own revision — including the setting, the gender of the cast, and more. As with his earlier adaptation of the equally lame baby Bardery of Titus Andronicus, Palmer can credibly claim that his script is better than the Bard’s — though that’s not saying much.

But though “The Two Gentlemen of Verona is, simply put, not a very good play,” Palmer’s program notes admit with admirable candor, “it is also full of innocence, passion, sweetness and earnestness.” In trying to connect Verona’s occasional felicities to today’s Oregon audiences, Palmer sought a familiar equivalent. Hmm, innocence, passion, earnestness… what recent era does that remind you of?

The ‘70s, of course! Not the 1570s, but the 1970s, before (at least in pop culture mythology) cocaine, Reagan, and the rest left us all jaded, bitter, and broke. Accordingly, Six Gentlepersons of Verona swoons with suede buckskin fringe, bell bottoms, platform shoes, disco ball, weedy humor, and other artifacts many of us who were there the first time hoped never again to see.

Or hear, because the biggest change Palmer has wrought is turning Verona into a jukebox musical circa 1974, replete with sincere ‘70s singer-songwriter tunes, many so intentionally cheesy that I canceled plans for a post-show pizza at the Venetian restaurant. Contrary to myth, the early ‘70s birthed plenty of great pop tunes (Parliament, Stevie Wonder, Steely Dan and much more), but these songs were chosen not for their quality but for their lyrics, which, as in any good musical, underline or advance plot points. And yes, when the characters dance, they do indeed do the Hustle.

Bummer, man. While the ‘70s stoner schtick produces some chuckles (as when Palmer transforms Shakespeare’s already juvenile extended double entendre on “staff”  from phallic to pharmaceutical), doesn’t the already flawed and sappy Two Gentlemen of Verona need less Dazed and Confused, and instead a serious dose of ’80s coke/speed/punk energy?

Fortunately, that intensity is supplied by the show’s strong acting and direction. Rather than seeming unfocused and naive like its characters, original script, and setting, Six Gentlepersons comes off smart and fun — the sweet side of the ‘70s.

That story covers a couple of couples, Valentine hearts Silvia, and Julia hearts Valentine’s friend Proteus — who’s smitten by Silvia. Those conflicting desires fuel the clunky plot, which is further fired by a pair of fools, Launce and Speed, snappily played by Jessi Walters and Kaia Hillier, respectively.

The all female cast (hey, it was the era of women’s lib and the Equal Rights Amendment, another ‘70s idea recently revived in Oregon), both older and maler than the characters they play, does a sound and entertaining job of portraying adolescent impulses of both genders. This is the second XX-only Shakespeare production from B&B, a company deeply committed to gender equity that’s relatively rare in a theater world that often marginalizes female performers. Clara-Liis Hillier’s Valentine commands attention, both for her sympathetic acting and strong alto singing. Cassie Greer’s Proteus gets adolescent awkwardness just right. The underwritten actual female roles leave the actors little to play with, but the male characters’ caricatured hips-forward posturing and swagger benefit from Palmer’s characteristically detailed attention to physical gesture and movement, a hallmark of B&B productions.

Palmer and scenic designer Megan Wilkerson conjure theatrical magic from the intentionally low-budget set (stacked painted cardboard boxes that actors rotate to provide scene change backdrops), which, combined with Melissa Heller’s thrift store fashions and music director Beth Willis’s superb a cappella music arrangements (accompanied only by the actors’ own clapping and stomping) give the whole production a refreshingly homespun feel that suits both the era’s latter day hippies and the story. Only the rapiers needed for the climactic sword fight seem out of place. Since it’s set in the ‘70s, maybe they should have used toy store light sabers. 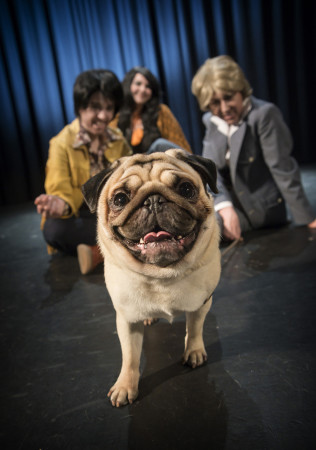 Yet even all that lipstick can’t fully prettify this pig (or pug). Although Palmer noted that the script contains “kernels of genius” (some nice monologues, some excellent ideas that would be fully realized in later plays), and he followed the other adapters in trying to fix the improbable ending, no amount of tinkering can really salvage this lemon. If anything, given that you’re going to tweak the already re-jiggered script, it might be worth going even further, replacing the dialogue’s archaic second person pronouns at least with “you” and “your” (to the extent it wouldn’t interfere with the rhyme scheme), tightening and trimming even more. Maybe you’d wind up with a version performable in schools that would work for an audience that would really appreciate its “innocence, passion, sweetness and earnestness”: teens.

But even if it’s neither top-shelf Shakespeare nor peak Bag & Baggage, this colorful Six Gentlepersons of Verona is well worth the easy journey to Hillsboro (the Venetian is a short stroll from the Blue Line Max station) for its dizzy ‘70s flashbacks, its spiritedly simple but never simple-minded production, its easygoing tone, engaging acting and directing, and of course the uber-cute Mick, the last minute fill-in under(study)dog who guest stars as Crab the Dog (he’s in the original script). Mick’s bio and pugshot are inexplicably omitted from the program, but he must be well on the way to his Equity tag. (During the talkback, Palmer lamented the untimely ascension to canine heaven of Mick’s aged predecessor in the role just before the show opened, wondering how the venerable Obie might have interpreted the part.) Just don’t be surprised if you catch an earworm (say, for example, “Jackie Blue”) on your way out.