A. L. Adams joined us for last Saturday’s performance of Love’s Labour’s Lost and, although she found the show entertaining, she wondered about the overall impact of the approach….A fascinating take on our Love’s Labour’s! Read the review online here or below:

Sleek and exuberant, Bag & Baggage’s production hits its goals entertainingly – and sometimes a little too squarely

Sometimes just by watching a play, you can guess its producers’ priorities. Bag & Baggage’s Love’s Labour’s Lost is exactly that kind of show, hitting a few distinct marks so directly that its aims become transparent. This play clearly wants foremost to be: 1) stylish. 2) exotic. 3) accessible. 4) energetic. Last Saturday night, it was all of those things…some to its credit, some to a fault.

It should be noted that B&B artistic director Scott Palmer prefaced the evening’s performance with a short-but-informative presentation of director’s notes about Shakespeare’s inspiration for Love’s Labour’s Lost (the Bard’s successful attempt to curry favor with nobility through a slew of inside jokes), its original run-time (more than 4 hours, oof) and its checkered history (it was retired from the stage completely for some 250 years). More’s the wonder that Portland’s seen it twice this season, another version just having closed at Post5. Palmer explained his company’s very rational choice, in light of its liabilities, to hybridize Love’s Labour’s with a sprightlier, anonymous adaptation of the story The Students. Additional aesthetic inspiration came from the 1960 Fellini film La Dolce Vita. 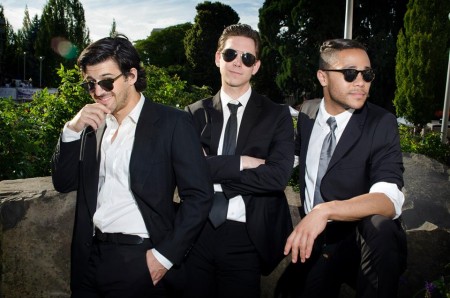 But now back to the key features of B&B’s treatment:

1) Stylish. Check. The women (Cassie Greer, Arianne Jacques, and Jessi Walters) ride into the The Tom Hughes Civic Center Plaza on Vespas and strut around in gowns with snug hips and flowy trains. The men (Andrew Beck, Chip Sherman, and Luke Armstrong) are resplendent with slick hair and aviator shades. Red-pompommed “Spanish dancer” costumes make a cameo, as do foreign soldier dress-uniforms. Bag & Baggage has a great knack for presenting period-inspired eye candy for window-shoppers, and the generally well-heeled Hillsboro crowd adores them for it.

2) Exotic, naturalmente! In keeping with Bag & Baggage’s Italian inspiration, a few characters have pronounced (non-English) accents. Spanish knight Armado (Gary Strong) and servant Moth (Adam Syron) lay it on thick, sounding more Italian than Spanish. Jaquenetta (Rachel Rosenfeld) inflects her lines with a Cousin Vinnie Italian-American bravado. The aforementioned styling also bears a “Euro” flair. When the men imitate Russians, they affect appropriate accents. They also hum Hava Nagila and goose-step (sending me scrambling to Wikipedia to verify that, yes, that tune probably originated in that region, and that Russian soldiers, not only Italians and Germans, performed that move. Phew.)

3) Accessible, completely. This play is committed to not letting us miss a thing. Of course, that’s an “individual results may vary” endeavor, changing with each show and every audience member, but the effort is extreme. Those with incredibly heavy accents take great pains to slowly enunciate each word. Many gesture along with their lines so much that it resembles sign language translation. (At least four times, for instance, an actor traces an hourglass in the air to indicate “woman.”) Overall, the actors seem keenly aware that they’re performing outdoors and must make everything “bigger.” That worry is generally well-founded; Portland Actors Ensemble’s Antony and Cleopatra earlier this summer in Laurelhurst Park saw such a turnout that the outskirts of the crowd had to strain to hear and see, and the actors had to bellow to be heard and over-gesture to be seen. But here, a contained crowd and echoey courtyard don’t demand such heroics. Hence, last Saturday at least, the cast seemed to overshoot the space.

4) Energetic, unflaggingly. There’s certainly never a stoic moment in this lively pageant. Expressive gestures punctuate bouncy blocking, everyone is scurrying and skirmishing, and there’s hardly a second of mere “standing around.” A surprising number of times, one character uses another as furniture. It’s a great romp, but its impressive indefatigability risks blunting its dynamic range. In other words, B&B has tuned the excitement to such a consistent pitch that last Saturday, after a while, it became a hum.

Over-exuberance, as problems go, is a great one to have, and for some of Love’s Labour’s audience, a little much will undoubtedly feel just right. But as of Saturday, when the play’s leading ladies admonished their suitors to be patient, the suggestion echoed back on the show itself. I’d rather be gradually courted through a story, than hotly pursued the entire time.