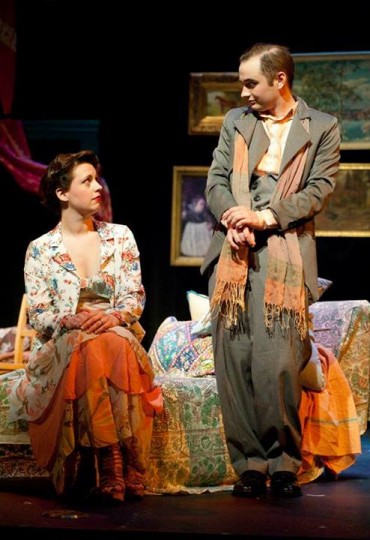 Amanda and Elyot can’t live together, but they can’t stay apart, as Joe Jackson once sang. The divorced couple remarry other partners — and find themselves honeymooning next door to their also-just-remarried partners. We’re all set for a laugh riot, right? And eventually, we know (from lighter Shakespearean comedies to Astaire and Rodgers films on down), the estranged partners will discover they really love each other, reunite and live happily after ever, blackout.

That’s what happens in Noel Coward’s 1930 masterpiece Private Lives, all right. But all that happens in the first act … and there are two more to go.

Where Coward takes us next isn’t at all what we’d expect, particularly from a playwright with a reputation for wryness rather than rage, and (by modern standards) superficiality more than psychological depth. Which makes Private Lives‘s ultimate destination — messy, painful reality rather than bubbly wishful thinking — all the more surprising, even 80 years later, when we inhabitants of the age of snark think we know all about puncturing ideals.

And that’s why Bag and Baggage Theater’s unexpectedly poignant production of Coward’s “intimate comedy,” which ends this coming weekend, has as much to offer today’s relationships as it did our great grandparents. Despite the period setting, the story feels so modern, I can imagine a staging conducted entirely in text messages.

I can also imagine one that plays up the withering Coward wit and its unlikable protagonists’ sarcasm. But instead, director Scott Palmer unflinchingly looks beyond the cynical humor and into the very dark and real flaws that real people in real relationships harbor, and which ultimately keep couples that we imagine would be perfect for each other apart. It’s a Private Lives for the post-Who’s Afraid of Virginia Woolf generations.

The fury bubbling beneath its lead characters’ breezy facades gives Private Lives its tension. A closeted gay man in a homophobic era, the British-born playwright, songwriter, composer, lyricist, actor, singer, director, novelist, painter, fashionista and Blithe Spirit knew all about facades. He made the world believe that a barely educated, impoverished working class kid could through personality, charm, determination, and autodidactery embody the decadent sophistication he was fortunate to witness thanks to the generosity of a wealthy patron during his adolescence.

With their seen-it-all world weariness and assiduous avoidance of commitment, Elyot and Amanda seem to embody Coward’s (who played Elyot in the premiere) dissolute playboy / frivolous flapper image; the play never reveals what they do for a living, and they’re apparently wealthy enough (vacation flat in Paris, frequent world travel) to be unconcerned about it. They live for the emotional flash bang of charged relationships, which makes any hint of stability calamitously frightful. They light each other’s fires, in both ways, so in a way it’s no surprise when they flame out.

What is surprising is that Palmer’s production makes us care about this poisonous pair as their reconciliation dissolves in a hostile haze of brandy and recrimination. We come to understand that they’re both fueled not by the prospect of stable love but by passion, whether positive or negative. We chortle at their wryly funny lines and the feathers flying from their pillow fight — while at the same time wincing at the sadistic physical and verbal cruelties they also inflict on each other. Palmer and Coward constantly remind us that, however contradictory it seems, their relationship contains both. 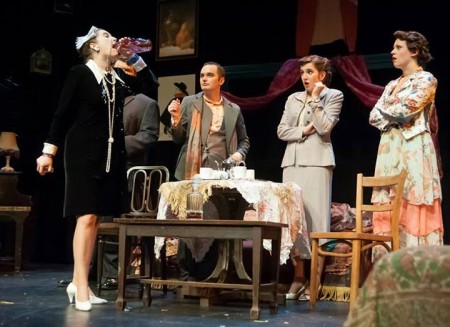 Adam Syron and Chrissy Kelly-Pettit somehow project their characters’ vulnerability and charm through the barbed lines. Rather than the superficially similar but more flagrant brutality of the next generation’s Virginia Woolf (at least as memorably portrayed by Richard Burton and Elizabeth Taylor), their impending collision is all the more poignant, pulsing like magma under the characters’ affected Jazz Age insouciance (no less a facade than its predecessor Victorian stiff-upper-lippiness), inevitably to erupt. As we struggle to reconcile how people who so clearly adore each other can also be so cruel, we see the tragedy coming — and also why they can’t prevent it.

But the sympathetic approach comes at the expense of believability. Although we do need to see why they’d be passionately attracted to each other in the first place — and the second — we also need to believe that Elyot and Amanda are capable of the kind of manipulative cruelty that also fuels them, and despite their obvious effort and and chemistry, neither lead actor quite packs that kind of sucker punch. It’s a tough acting challenge: pulling off the ugly reality underneath while simultaneously and believably capturing the glittering facade. Palmer sets the rubber-faced Syron mincing (maybe a nod to Coward, whose relationships bore obvious similarities to the character he created) and occasionally mugging, but his expressive physicality sometimes seems as though he’s in a different play than the others, and his grinning verbal attacks can’t quite muster the requisite acidity.

Kelly-Pettit’s Amanda needs more of the kind of caged ferocity of, say, Katharine Hepburn, or even the sweeter but no softer Emma Thompson in Much Ado about Nothing’s battle of wits. I imagine the famously fiery Vivien Leigh would have supplied that fury in spades when she played Amanda opposite her new husband, Laurence Olivier, in a radio production. Still, the relatively gentler approach Syron and Kelly-Pettit take is always worth watching, if more in sympathy for their characters’ vulnerabilities than horror at their viciousness.

Olivier, in fact, actually played the supporting role of Victor in the original production, but that part and the parallel female character of Sybil (played here by Arianne Jacques) are gender caricatures — he stolid, simple, solving conflicts with fists rather than wits; she insecure and wimpy. They’re so different from Elyot and Amanda, so utterly predictable, that you can easily appreciate why the former would flee to them in the wake of their breakup — and why they’d quickly prove inadequate by comparison.

The supporting characters’ underwritten parts (they really function more as plot devices than real characters) pose a dramatic challenge that not even this clear-eyed production (and Gary Strong’s persuasive, Cary Grant-accented performance) can fully solve, because in the end, they get the last word. We have to believe they turn into Elyot and Amanda, but neither the script nor the production can really make that transformation believable.

Palmer’s frequently brilliant direction, though, makes the journey worth taking. The show crackles with taut dramatic timing, and modest yet telling nonverbal accents — a broken cigarette here, irritatingly stirred coffee cups there, an unexpected same sex smooch. Palmer subtly makes the characters’ motions echo each other when they’re emotionally aligned, and finds inventive ways to pit them against each other in back and forth spats that could easily turn into tedious ping pong matches. Occasional silences add to the impression of ultimate vapidity beneath their sass and sparkle. Set, costumes and lighting all suggest the characters’ colorful chaos without distracting us from their verbal thrusts and ripostes. And Theresa Park’s brief, hilarious appearances as a cynical French maid who’s called upon to clean up the main players’ messes provide delicious intermittent doses of sane perspective on their self-absorbed fantasy.

Noel Coward’s veneer of above-it-all charm was so successful, both in the play and in his career, that it eclipsed the darker, more complex reality beneath. In Private Lives, his master stroke was juxtaposing, not trying to artificially resolve, those seemingly conflicting strains in his characters. Just as Elyot and Amanda both love and loathe each other, Private Lives is both charmingly witty and at times unbearably cruel, and it’s in those all-too-real contradictions that the play still moves us. It’s to Coward and Palmer’s credit that they make their tragicomic protagonists’ irreconcilable attraction make sense, without ever granting us — and its characters — what they so desperately think they want: a false reconciliation.