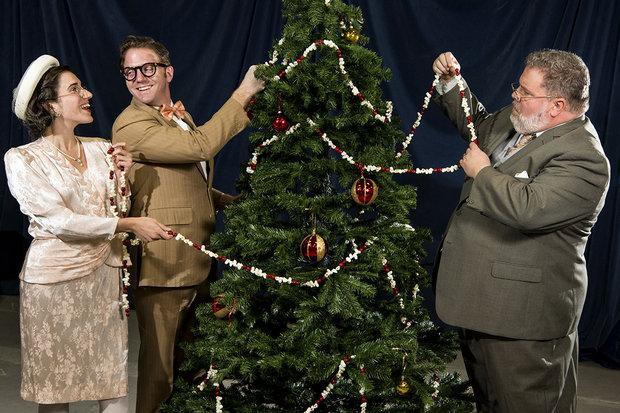 The Hungarian play that inspired a trio of iconic films and a massive Broadway smash comes to Hillsboro for an Oregon premiere this holiday season.

Set during Christmastime 1937 in Budapest, Hungary, the play centers around two bickering employees at an upscale boutique, who have been building an anonymous romantic relationship through letters to one another for two years.

This popular comedy has been a favorite in Europe, but is rarely seen in the United States, and the Bag&Baggage production is the first in Oregon. Written by Hungarian émigré Miklos Laszlo, “Parfumerie’s” charming plot has been adapted to film several times, including “The Shop Around the Corner,” “In the Good Old Summertime,” and “You’ve Got Mail,” and as the Broadway musical “She Loves Me.”

“‘Parfumerie’ is a bit of a change for us,” said Founding Artistic Director Scott Palmer. “For the past three years, we have been presenting over-the-top, adult-themed holiday farces but this year our holiday show is sweet, romantic, and filled with holiday heart. Maybe most surprising? It’s appropriate for the whole family.”

Although not a “brand name” holiday standard, “Parfumerie” has been growing in popularity throughout the country as an alternative to the usual list of familiar Christmas titles.

The play interweaves two very different plots; first, the owner of the Parfumerie suspects that his wife may be having an affair with one of his employees while, second, two of the staff of the shop have been bickering and fighting for years, unknowing that they have also been writing love letters to each other the entire time. Both plots come to their conclusion in the Budapest snow on Christmas Eve.

“There is a kind of nostalgia, a hearkening back to a simpler time in life, and in the style of theatre, represented in this show,” said Cassie Greer, B&B Resident Actor and co-director of the production. “It is funny and sweet, but it is also about love and forgiveness; it really is a perfect show for the holiday season.”

Performances take place from November 25th through December 23rd, 2016 at The Venetian Theatre in downtown Hillsboro. Tickets can be found online at bagnbaggage.org or by calling the box office at 503-345-9590.