You are here: Home / Press Coverage / The Oregonian Previews “THE DROWNING GIRLS!”

One husband, three wives, one bathtub in ‘The Drowning Girls’ play 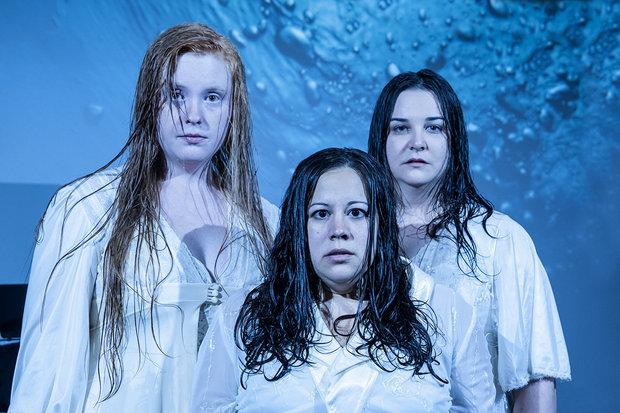 Bessie, Alice, and Margaret all have two things in common: They were all married to George Joseph Smith, and they are all dead.

Bag&Baggage is thrilled to present the Pacific Northwest premiere of “The Drowning Girls,” an award winning Canadian play exploring the lives, loves, and deaths of the three women at the heart of a notorious serial killer rampage in England in the late 1800s.

“The Drowning Girls” originated at the Alberta Theatre Project’s 2008 PlayRites festival in Canada and has been taking North America by storm ever since, racking up critical acclaim and praise for the haunting, lyrical, terrifying, and ultimately redemptive story of George Joseph Smith’s brutal killing of his three wives, dubbed The Brides In the Bath murders.

Performances of The Drowning Girls take place at The Venetian Theatre in downtown Hillsboro from Oct.13 through Oct. 31.

“It is so much more than just a thriller, more than just a murder mystery,” said B&B’s Founding Artistic Director Scott Palmer, who also directs the play. “It is really an imaginative reflection by the three main characters about their lives and deaths, about marriage, the after-life, and about our justice system’s
approach to women and domestic violence.”

George Joseph Smith was a serial bigamist, a smooth-talking dandy with a talent for exploiting women, and when it was discovered that three of his wives had all accidentally drowned, Smith was taken to trial. Although he protested his innocence for years, Smith was hanged in 1915 and the sensationalism surrounding his crimes inspired Canadian playwright Beth Graham, Charlie Tomlinson, and Daniela Vlaskalic to write “The Drowning Girls” to give the three women at the heart of the story their chance to speak.

“The play is basically set in a kind of purgatory,” said Palmer, who is working with B&B’s Scenic Designer Megan Wilkerson on the challenging set. “It starts off with each of the three wives emerging from the bathtubs where they died to tell each other, and the audience, about their lives before Smith, during their marriages, and after their deaths.”

The set requires each actor to perform the entire show in and around those bathtubs.

“No question about it, this is one of the most challenging sets we have ever designed, and we will be relying on a lot of theatrical stage magic to make it all work.”

More information and tickets can be found online at bagnbaggage.org.