You are here: Home / Press Coverage / “One For The Record Books!” CORIOLANUS Review 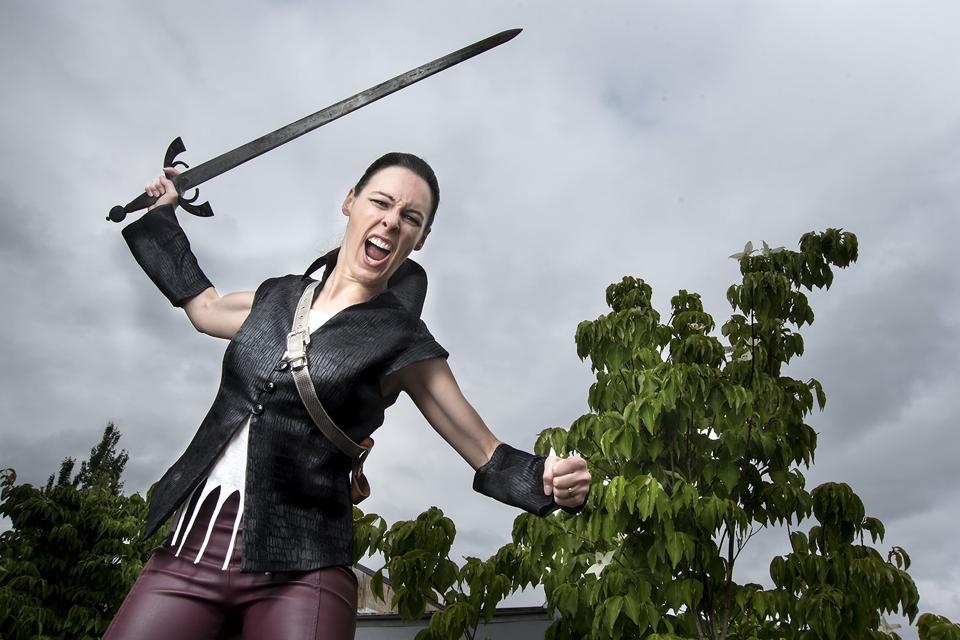 In the immortal words of Ebby Calvin “Nuke” Laloosh, “Sometimes you win, sometimes you lose, and sometimes it rains.”LaLoosh, an accidental bard of all things baseball and women, probably had no occasion in his short cultural education, courtesy of Annie Savoy, to read Shakespeare’s least popular and most overtly political tragedy, but on opening night of Bag and Baggage’s production of “Coriolanus,” the “Bull Durham” character’s words had a prophetic ring. The show, which was supposed to take place at the Civic Center Plaza in downtown Hillsboro, was driven indoors into Bag & Baggage’s brand new and still rough performance space by a forecast threatening to turn even broad swords soggy.

The evening, while perhaps not what the actors and audience were hoping for, shall still go down in the record books as a win for the indomitable spirit of theater and the Bag & Baggage players who, against the odds and exiting and entering by a busy alleyway and Hillsboro’s Main Street, brought the story of Coriolanus’s gory ascent and mighty fall to life with nothing more than a blue curtain and two white pillars for a set. The show must go on after all.

“Coriolanus” is an exploration of how elites use power, military might, and wicked cunning to maintain their own dominance and make sure the common people stay that way. At least that’s one interpretation of Shakespeare’s look at the hubris-heavy reign of Roman general Caius Marcius, given the nickname “Coriolanus” following his successful campaign against the Volscians, and Tom Sheridan’s 1750s adaptation of the play definitely casts Marcius in less than sympathetic light. To use a contemporary analogy, Coriolanus and his compatriots might be seen as the Donald Trumps and Karl Roves of ancient Rome, while their more liberal-minded, compassionate opponents, Sicinius (Morgan Fox) and Brutus (Lindsay Valencia-Reed), are the Bernie Sanderses and Elizabeth Warrens. Or vice versa, depending on your leanings. Partisanship is as old as Rome’s seven hills.

Lines of the Night

Understandingly suspicious of the martial-minded Marcius, Sicinius observes, “Nature teaches beasts to know their friends.” All well and good, but, as Menenius (the excellent Adrienne Southard) reminds the naïve idealist, nature is not politics. “Pray you, who does the wolf love?” “The lamb,” Sicinius replies. “Ay, to devour him, as the hungry plebians would the noble Marcius.”

“Noble” Marcius begins the play refusing an angry, starving mob some much needed grain for no real reason, except that their hunger annoys him. Later, after his triumph over the Volscians, he is asked by Sicinius and Brutus to speak to that same group of commoners, eager for words of wisdom from their skilled countryman. Marcius is incredulous. “You wish me to speak thus to such as these?” A general trailing clouds of glory clearly has better things to do than ponder corn supply and social justice.

Coriolanus’s contempt for the people of Rome earns him banishment and, given that this is a Shakespearean tragedy, his bloody death at the end of a dagger. (Well, several daggers.) But it’s not Romans who kill him; it is a group of Volscians, enraged because, having joined their cause, Coriolanus allows his wife and mother to talk him into negotiating a peace. How dare he thwart their thirst for revenge? Later, looking down on Coriolanus’s ruined body, the Volscian Lartius observes, with palpable regret, “My rage is gone, and I am struck with sorrow.”

It’s almost too easy to draw comparisons between the theme of the haves and have-nots in “Coriolanus” and our current economic and political climate, but an even more apt analogy might be that of the vitriolic nature of social media in a year marred by police violence, mass shootings, racial tensions, and debates about transgender rights. Director Scott Palmer does some masterful blocking in this show, making it clear that Coriolanus and his minions steadfastly occupy one side of the stage and political spectrum while Brutus, Sicinius, and the Romans are very much on the other. Neither the two shall meet. Then Coriolanus says the wrong thing – several wrong, terrible, awful things, in fact – and Sicinius and Brutus, earnest and just as stubborn as the conceited general, demand his head. Unfriended, in other words. It’s a sad reminder that, hundreds of years after Shakespeare penned this play, we’re still fighting like children. At least in “Coriolanus” the furious parties trade barbs in iambic pentameter.

Bag & Baggage chose to mount “Coriolanus” as an all-female production, and Cassie Greer is perfect as the general formerly known as Caius Marcius. Her strength both in body and voice suggest a warrior whose refusal to compromise is, at first anyway, admirable. Most honorable mention to Maryanne Glazebrook who is likewise stellar as Coriolanus’s long-suffering but brilliantly minded mother, Volumnia.

Creative casting of Shakespeare plays is one tool directors have at their disposal to keep the Bard relevant and hip, but it was difficult to discern just what was accomplished by giving all the roles in this production to women. One could assume that the message of Palmer’s casting decision is that everyone, regardless of gender, has the potential for brutality when given enough power and adulation, but that idea isn’t as complex as the others posed by the show, and while the expert work of the cast does allow one to forget there are no men on stage, one wonders, why cast only women in the first place?

“Coriolanus” is a tricky play that poses more questions than it answers. Should those gifted with superior abilities be allowed to make decisions on behalf of the “common people,” who, according to the elites, simply do not know what is good for them? Or should leaders rule instead with compassion, understanding, and leniency? Is democracy, with all its flaws, really the best form of government we can come up with? Is one person’s strong man another’s dictator?

If there’s a moral to this particular story, it might be that the civilization is maintained by people willing to compromise, to listen to one another, to admit, even when it’s painful and inconvenient and embarrassing, that they might not be right all the time. Generals are fallible. So are scholars and soldiers and mothers and mobs. Progress is possible only when we realize we are all in this together.

— Deborah Kennedy, for The Oregonian/OregonLive

“Coriolanus, or the Roman Matron”