Parody, Bag & Baggage Productions Artistic Director Scott Palmer says, gives us the best of both worlds: it reminds us of why we love the thing being spoofed, and it gives us the surprise and laughter of a new take on it. The humor comes from invoking those tired and true expectations, and then confounding them.

That combustible combo fuels B&B’s trilogy of holiday parodies, now complete with the world premiere of the third installment, A KBNB Kristmas Karol, which runs through December 23 at downtown Hillsboro’s Venetian Theatre. We all know Miracle on 34th Street and It’s a Wonderful Life (the targets of the company’s first two spoofs in 2013 and 2014) and this year’s Dickensian tale, so we laugh at how the plots and characters in Palmer’s original scripts scuttle our expectations of heartwarming holiday sentiment, while fondly remembering Jimmy Stewart, Natalie Wood and whoever’s playing Bob Cratchit and Tiny Tim in this year’s middle school production. 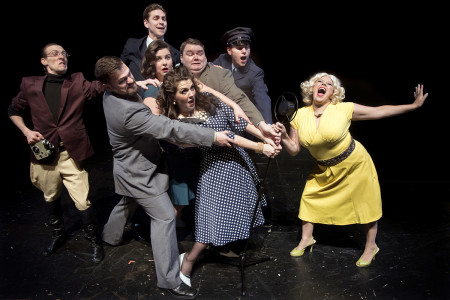 But now that the Hillsboro-based company’s frequently hilarious series has entered its third year, it, too has attained the status of holiday institution — which means the parody itself is ripe for parody. And in this sublimely silly final installment, B&B confounds our expectations again, capping the trilogy with a triumph. You don’t need to have seen either of the first two installments to howl at this one, which makes a satisfying conclusion to one of Oregon’s most hilarious original theater series.

The set up is the same as before: a hapless company of third-rate radio theater actors arrives at the studio sometime in the 1940s to do a live broadcast of Dickens’s 1843 Christmas classic, this time playing all the roles from Ebenezer Scrooge to Jacob Marley, the Ghosts of Christmas Past, Present and Yet to Come, and the rest. While they struggle to deliver the goods (including actor-generated sound effects) to the omnipresent giant microphone, and thence to untold thousands of listeners expecting warm and gooey holiday sentiments, the action on the rest of the stage dissolves into  slapstick, fueled by various interpersonal conflicts, misunderstandings, alcohol, and other classic farcical tropes. Stereotypes (ditzy blonde, dimwitted matinee idol, egotistical wannabe starlet, et al), puns and sight gags abound.

But we’ve seen all that before, and Palmer wisely realized that there was no way he could top the manic magic of last year’s prop-filled snortfest, in which comedy sometimes erupted in three different areas of the stage simultaneously, requiring multiple viewings to catch all the jokes. So in the first confounding move, he gives us a stage shorn of not only last year’s props, but also everything else, except for that ever-looming microphone, a cable to plug it into the network, and some scattered cardboard moving boxes. They’re the only remnants of the KBNB studio, which, we quickly learn has been moved out by a greedy television executive, Arthur Adams (played by Peter Schuyler), who’s converting it to a TV studio. The late ‘40s are, after all, when radio began to be displaced (for better or worse) by TV.

Abetted by two more new characters, Laverne North-Berkshire (Jessi Walters) as his scheming moll, and Heinrich Huber Hoffman (a shady European avant garde film director, played by Phillip J. Berns, whose Boomhower-like lines spew out in a a barely comprehensible mix of pseudo German and English), the nefarious Adams and the regular five-member cast (Clara Hillier as Felicity, Jessica Geffen as Lana, Andrew Beck as Donald, and Jeremy Sloan as Officer Gilroy Gildersleeve) must deliver a Dickens classic, sans  sound effects generators or even scripts — which at least one of the actors has failed to memorize or possibly even open.

Can they pull it off? Even more important: can B&B’s company pull off another successful spoof as their fictional characters strive and struggle to safely reach Tiny Tim’s ultimate “God bless us everyone”? 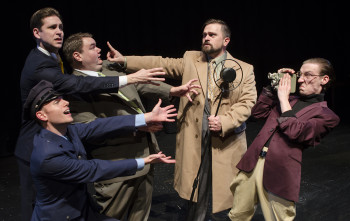 To compensate for the lack of supporting material and familiarity of the situation, this production ups the ante in physical comedy. Palmer (whose pre-show talk revealed that his research included copious viewing of old Laurel & Hardy, Three Stooges and Carol Burnett sketches) gooses the overacting to even sillier heights / depths, stretching their already broad characteristic gestures (fey swishes for queenie cop, melodramatic posturing for narcissistic starlet, etc.), and otherwise cranks the overamplification up to 11, including frequent pantsing and mammary mishaps And that’s just the first act.

As enthusiastically as the eager overactors mugged and exaggerated, Friday’s performance never quite attained the tightness, momentum or sheer antic intensity of last year’s Miracle on 43rd Street,in part because the basic gag is, after all, three years old, in part due to less sheer density of humor in the script, and in part thanks to the usual opening night stiffness that occasionally left the all important (in this kind of dialogue in particular) timing just a little off. Sometimes they strain for laughs. But the company’s chemistry seems stronger than ever (probably thanks to their three-year experience in these roles), the performances uniformly persuasive, and last year’s triumphant experience suggests that they’ll quickly settle in and tighten up.

Just when you can’t imagine the zaniness quotient spazzing any higher, Palmer does the unthinkable and pulls a complete reversal in the second act; after a curious set piece involving some long pauses stretched for effect, he turns the onstage action to the last thing you’d expect. It’d spoil the fun to reveal just what that move is, but suffice it to say that the cast pulls it off brilliantly, turning this concluding episode into an unexpectedly heartwarming performance that will satisfy traditionalists and maybe even the Scrooges out there. As a result, maybe even more than the previous editions, A KBNB Kristmas Karol achieves the twin goals of parody: while surprising and delighting us with its original lampoons, it reminds us (more than any typical straight production) of why we cherish A Christmas Carol in the first place. 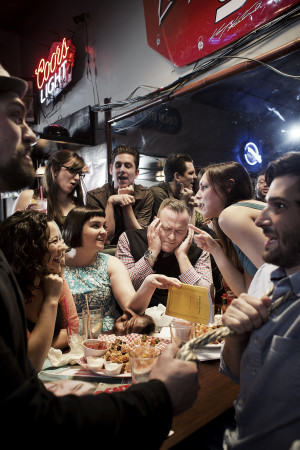 That would make a satisfying conclusion to the story — except that at the very end, just when you think you know how it’s going to wrap up, Palmer pulls a double reverse in the plot that reframes everything that preceded it. Unlike the multiple endings in last year’s Miracle on 43rd Street, this time, the double cross works a treat, embracing the confounded expectations that underlie Bag & Baggage itself: who in the national theater community would have imagined that high quality, quirkily original, yet broadly accessible theater could thrive in a relatively obscure West Coast town? Yet for years,  B&B has done just that— so much so that a company in Philadelphia now wants to produce all three holiday shows there; the irony of that development will become apparent to those who stick with this performance to the end.

Nevertheless, Palmer vows never to return to the KBNB studios. Bah, humbug! I hope eventually the company, after having invested so much creativity and effort in these shows, does revive all three productions, trimming the clunker moments that are only apparent after trying them in front of live audiences. Like Texas’s A Tuna Christmas, imagine Oregon’s own recurring homegrown companion to It’s a Wonderful Life, Messiah, The Nutcracker … and A Christmas Carol. Bringing the 1940s radio spoof trilogy back to life certainly wouldn’t be the first time Bag & Baggage has confounded expectations.