Bag & Baggage’s revelatory story of the first celebrity serial killing puts the spotlight on the women, not their murderer

Bag and Baggage Productions sure got the timing right for its production of The Drowning Girls. We arrived at Hillsboro’s Venetian Theatre opening night amid a deluge, only to hear the eerie recorded echoes of dripping water and see beautiful projected aquatic imagery against the back wall behind the stage.

Water, water everywhere; the three actors spend much of their stage time in Victorian bathtubs, their hair and bathing gowns drenched. The magnificently minimal set features a trio of three-story tall figurative shower curtains. In this third Bluebeard story of the season (following Shaking the Tree and the Oregon Symphony’s productions), water has replaced blood as a signifier of wife murder.

Those potent production elements, including the gripping acting and directing, make The Drowning Girls overcome a flawed though frequently fascinating script to produce a wonderfully immersivetheatrical experience. 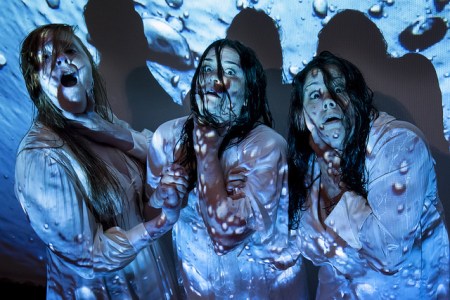 The timing is apt in another way. This show about the social sexism that contributed to the serial murders of three women opened just hours after a celebrity presidential candidate revealed his serial sexist violation of today’s women.

Of course, Bag & Baggage artistic director Scott Palmer couldn’t have known what was going to happen at the end of the 2016 presidential campaign months ago when B&B chose this play for its fall production. But while the scale of the two violations a century apart differs, the underlying social attitudes that contributed to them remain, as Palmer put it, “sickeningly relevant.” Like The Shiningor Silence of the Lambs (though less gruesome than either), it’s that rare Halloween/Day of the Dead show that really makes you think and sympathize instead of just scaring you.

“Who here can name a serial killer?” Palmer asked the audience at Friday’s pre-show talk. Bundy, Lecter, Gacy… the names rattled off quickly. “Let’s take Ted Bundy,” Palmer continued. “Now, who can name any of his victims?” Silence.

Canadian playwright Beth Graham, Charlie Tomlinson, and Daniela Vlaskalic commendably decided to rectify that omission in The Drowning Girls, based on late 19th century Britain’s string of murders that culminated in what Palmer called the first celebrity mass murder trial. George Joseph Smith, operating under various aliases, inveigled at least three (and probably more) women to marry him and make him their beneficiaries, then killed them. The “Brides in the Bath” murders kicked off the century’s sensationalist obsession that too often winds up making the killer — from Hannibal Lecter on down — a kind of anti star.

That’s what happened in the press then, during the trial that preceded Smith’s 1915 execution. But making the grisly story into a traditional murder mystery would shift the focus from the women to their killer. Instead, “it is really an imaginative reflection by the three main characters about their lives and deaths, about marriage, the after-life, and about our justice system’s approach to women and domestic violence,” writes Palmer in his program notes. Through imagined afterlife conversations with each other and re-enactments of the moments in their lives that led up to their untimely ends, The Drowning Girls puts the women at the center and gives them names, faces, and stories. They’re never mere victims. It’s their story, not their killer’s. 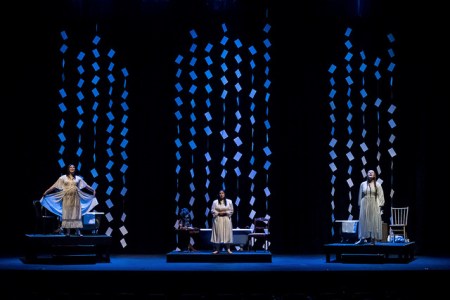 It also shows us the social context that made them vulnerable. Palmer’s pre-show talk explained that with many men having departed for America and Commonwealth lands, England’s eligible female to male ratio was unnaturally high. Facing the prospect of a life at best empty, at worst impoverished, “spinsters” of their class were easy pickings for a scoundrel clever enough to sense their vulnerability, greedy enough to steal their money, and ruthless enough to kill them days or even hours after their hastily arranged nuptials. Drowning Girls makes us feel the social shaming and economic precarity that coerced them into dangerous liaisons.

The script also brings a fresh perspective to how it tells its story. Rather than using conventional narrative, the entire play is recounted by three women, who play not just the murdered brides but also a multitude of other characters, from family members to maids to, briefly, the perpetrator himself. Sometimes narrating, sometimes re-enacting, with the shift deftly signaled by lighting changes, the women never leave the stage. We feel closest to them when they’re expressing their hopes for love and a better life than Edwardian (and probably Victorian) England can offer them as singletons. But the play never sentimentalizes them; in several blackly humorous passages, these spunky women are even able to joke (from the grave) about their fatal attractions.

This minimal approach requires a production that holds the audience’s attention. Along with the superbly spooky stage (Megan Wilkerson), sound (Palmer) and lighting (Jim Ricks-White) design, Palmer’s sharp direction and choreographed movement keep the women and our eyes moving without seeming fussy or merely busy, subtly underlining character traits while conveying the action. Nor does it resort to cheap thrills: there’s nothing macabre, gory, or even especially disturbing in the stage action itself.

In what must be some of the most exhausting bravura performances delivered on Oregon stages this season, the actors who play Alice Burnham (Autumn Buck), Margaret Lofty (Jessica Geffen) and especially Bessie Mundy (Jessi Walters),  brilliantly bring these forgotten, long-dead women to vibrant life. Commanding our attention and sympathy throughout, they’re reason enough to see the show. 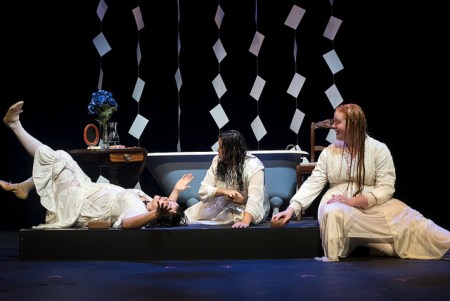 Good thing, too, because while the script gets so much about the characters and their world right, its narrative strategy gives the audience little reason to stick with the story past the overlong first act. From the get-go, we know whodunnit, and by the end of the first act, we have a pretty clear portrait of the victims and their world. The only remaining question to drive the plot and our interest is howthe killer did it.

That’d be fine in a conventional murder mystery or police procedural, typically told from the point of view of a detective (Sherlock Holmes, Colombo, the CSI team), a prosecutor, or possibly (Agatha Christie) the killer.

But that’s not really what this play is about, and making it about solving the crime would undermine the richer story Drowning Girls wants to tell about its women characters and the society that helped doom them. Yet without that narrative drive, the second act flags.

The authors started on the right track with the immediate revelation that the characters have been murdered, setting us up to wonder why — not how — they met their fate. The moment of our realization should be the dramatic climax.

That’s the moment the killer proposes murderous marriages — and we understand why they accept. It’s the moment when we most identify with them, feel their hopes and fears. It’s the moment that reveals how a repressive, anti-woman society drove these women into a killer’s sights. Unlike this well-timed production, here the script gets the timing wrong, because that moment occurs around the middle of the play. It should come near the end. They should have told the story backwards.