As Coriolanus and her soldiers stormed up the steps of the Hillsboro Civic Center with swords at their sides, a group of pedestrians across the street yelled somewhat in jest: “Killers! They have swords!” From the pavement to the confusing current global political theater,Coriolanus, Shakespeare’s most chameleonic of plays, still finds a home. Bag&Baggage uses Thomas Sheridan’s 1749 revision of Coriolanus (Sheridan retitled it Coriolanus, or the Roman Matron) and an all-female cast to suck out the marrow of the drama in our high-stakes and stressful election year.

The stage for this production, which Bag&Baggage is calling the first recorded production of Sheridan’s version in American history, is outdoors, with an almost rooftop vantage on the backside of the civic center, facing the MAX tracks. A 21st century brushed-steel pediment is supported by sleek columns, a forum where pristine glass meets seamlessly with new concrete. Behind the windows are faint corporate printed posters of important civilians; here and there a plastic office machine or grey Formica desk pushes against the many panes doubling the repeated squares. Panels of red and black with sniper-looking holes make up the curtain. Gene Roddenberry would approve the design. The “stage” pans out with more cement and potted-flower arrangements that lead to a vast set of stairs. The action in Coriolanus takes place throughout this space, moving all around the audience. The cast is a moving chessboard, with geometric choreographed marches and moves. It’s as if we in the audience are the Roman “people” who sit and judge where the corruption lies, and with which official. 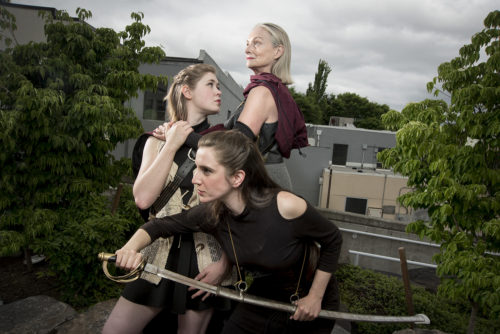 Cassie Greer, athletic and tan, carries this Coriolanus with the posture of a masculine corporate predator. Her black hair, tightly pulled back, creates a signature that says whatever lies on the inside is exactly where it will remain. Her Coriolanus has no human weakness on the surface. In the most important scenes of the play, her finished rhetoric reverberates like a cannon blast off the concrete set and echoes over the rooftops. There’s some Napoleon thrown into her approach to the character: an upstart nobility that is on the verge of being drowned by arrogance, but for a while is smart enough to keep it under wraps. She moves like the petit emperor, every minute a pose to justify her authority. The two whips of eyeliner she wears frame her eyes, not in a feminine way, but more like minimal warpaint and an ornament for seduction.

Who is this Caius Martius Coriolanus, and can we like her? Most likely he was a real Roman general who defeated a nearby people, responded poorly to a wheat crisis that left the city on the verge of riots, and switched sides by joining the people he had conquered. Shakespeare may have been digging in his Plutarch’s Lives, when a grain crisis hit England and he was fined multiple times for storing too much grain. Here we have to give our propers to the Bard for not taking and writing about his side, but true to his genius insight into the human condition, making complex material out of his own troubles.

True again, his plays are open to endless interpretation, and the staging of Coriolanus has been placed through many filters in theater and on film. A production a few years back in Edinburgh by controversial director Lin Zhaohua had two live heavy-metal bands performing onstage. One infamous production in Paris in the 1930s led to a riot between Communists and Fascists, who blamed each other for making propaganda, which resulted in the play being banned in France for a time. Most productions take a side: either with Coriolanus or with the people. In one example, Coriolanus is seen as a Che Guevara, a man so intent on radicalizing the people that he adopts severe Maoist policies and loses touch with his wards. In another, completely reimagined by Brecht, Coriolanus betrays the people at the outset by being a hero, a man who puts worship of an official and power above the common good.

It’s altogether possible, given Shakespeare’s obsession with the politics of his day and the Machiavellian man, that the root of Coriolanus is ambiguity. The general is a by-any-means necessary sort of guy. Coriolanus has some Lear to him: he never trusts the right people, mainly himself, until it’s too late. Like Othello’s wife, Desdomona, Coriolanus’ wife, Virgilia, is a doe-eyed Vestal Virgin on the streets, but obedient in the sheets. Many lit critics of Coriolanus have written about his mommy problems, most brilliantly the poet Delmore Schwartz, who uses the ghosts of Freud and Marx to analyze that the Roman general’s problems lie in being raised as a golden boy who matures not into success, but rather with an Oedipus complex. By casting only women, Bag&Baggage director Scott Palmer removes much of the hundreds or thousands of ways to interpret the conflicts by taking away our psychological expectations of boys behaving badly. We look at the fundamental ideas in the play, not filtering it through our own programming around the dynamics between men and women. 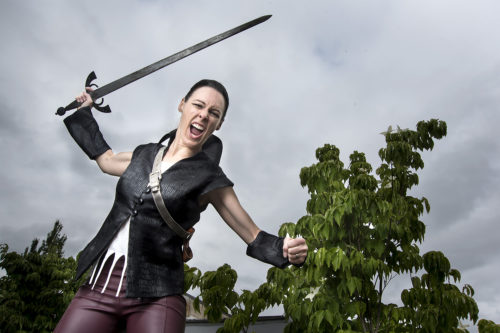 There’s still an enormous amount of tension onstage, because in this production not one faction is right – each of them has a self-interest that leads to destruction. There’s a false idea that women are the gentler sex, but we could look at Imelda Marcos, Margaret Thatcher, or Mexican cartel boss Melissa “La China” Calderon as a few examples and see that all humans are capable of killing and war. Palmer’s organizing of the cast thoroughly in sync-by-sync movements reinforces the military tone of the play and the raw human natures of the characters. Instead of productions where lust between military commanders, lust for a mother, lust for fame, or lust for blood become dominant, Palmer makes a statement that takes away the descriptions and boils the play down to a powerful stem cause. With Palmer’s direction and Greer’s interpretation, we come to sympathize with the hotshot blood-shedder Coriolanus, because we see she’s just a nervous progeny who has been spoon-fed a diet of pride and vanity.

Maryanne Glazebrook is a silver-haired, neatly figured Volumnia, mother of Coriolanus. She comes off first as dutiful to the state and loyal to her son, a dangerous maternal instinct run out of bounds. As Coriolanus assumes greater position after defeating the Volsci, Glazebrook’s Volumnia, like a controlled volcano, starts leaking her subconscious desires to have her child at the apex. Like mother, like daughter: the suppressed need for power can hardly hide. Volumnia is always at the head of a triad with Coriolanus’ wife and her friend Virgilia. While she wears a kind of feminine grace, most of her actions are as a chorus-director to the pair. She has a constant need to control. This mother of Coriolanus exudes not so much a psychic incestuousness; she is rather the creator of damaged results, which Glazebrook presents as a modern-day helicopter parent who gives a pink slip saying, “debt owed for the life I gave you.” She pushes Coriolanus into the public eye with no regard for what her child wants. She bore him, raised him to be the crowning jewel of Roman society and live a life in her honor. Toward the end of the play, as she appears with blackened eyes and a veil of mourning, her graveled and congested cries to Coriolanus seem insincere. Even in her emotional break the me-me-me echoes through Coriolanus’ skull.

Melissa Heller’s costume design seems inspired from a road-warrior dystopia and ancient Greco-Roman pottery. The veils and masks show a profile of the actresses not so much as the accessories for a pretty-maids-all-in-a-row, but instead as the the plumage on a Spartan helmet. The coats, pants, and shirts are simple, but with sharp-lined features that accent the militaristic society the women live in. The bold solid colors put the women into different tribes and complement the straightforward architecture of the set. The costumes could be clothes found in local stores, but Heller constructs the fabrics and layers in a way that makes them ingenious props to the characters’ attittudes.

Cominius (Autumn Buck) is Coriolanus’ right-hand man for a while as they take over the Volsci, and gives well-executed speeches that jar the narrative as she speaks by an authority of reason, which is quickly leaving the plot. She supports Greer’s Coriolanus with a mastery of the Bard’s quick-witted poison words. Adrienne Southard is Menenius, a friend to Rome and Coriolanus whose presence onstage is a solid, square-shouldered, Colin Powell-type match for Cominius’ cool head.

Brutus (Lindsay Valencia-Reed) and Scinius (Morgan Cox) make up a dynamic duo of magistrates for the starving poor people of Rome. Both are well-toned, with short-cropped hair, and they work the play and undo the glories of Coriolanus’ military campaign in what almost seem like ancient Twitter battles of ego. As they serve the words back and forth to one another and at Coriolanus, the pair make it obvious that alone they could not take down the insolent leader, but as representatives of the people they only work as characters together. Cox and Reed seem smug at points: hands in pocket, heads cocked back with snarled grins. At times they make  a mirror of Greer’s Coriolanus and suggest that they have personal motives, too. Maybe they want to gain power from Coriolanus in the name of the people, but not for the people. 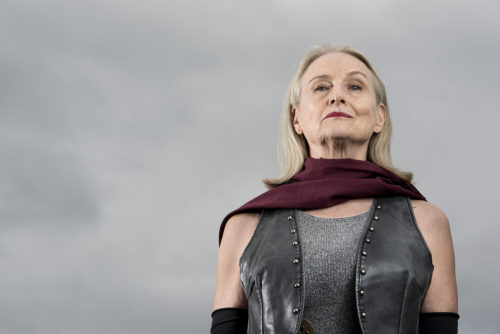 The real people are the Volsci as they fight, cry, plead, and make double deals to survive. Theirs is a culture of desperation, but it depends on unity, not the crowning of one head. Bethany Mason as Aufidius, leader of the Volsci, plays the most dynamic of characters, and in her voice she can hinge her community and the audience into trusting her as she deceives Coriolanus. She spins a tangled web where passion is transformed into blood, but always vibrates on the surface as simple lust.

In Sheridan’s adaptation, turning away from Shakespeare’s original ending, the fate of Coriolanus is made into propaganda, a statement itself. One of the Volsci soldiers cries out in agony in the last scene: “My rage is gone. I am struck with sorrow.” Those words have never rung truer than today.