The holidays can be hellish for arts lovers whose quest for fresh experiences and insights often collide with the seasonal insistence on the familiar. Portland theater companies are responding by creating new holiday traditions. This year’s Bag & Baggage holiday show repeats much of the formula of last year’s It’s a (Somewhat) Wonderful Life: Take an overfamiliar holiday film, pull back the camera a level by framing it as a radio play production, write a new comic story involving the actors who are playing the movie roles — and somehow make it all (a live theater play about a radio play about a movie) work. Director Scott Palmer even recycled the same set (including the division into three zones of sometimes simultaneous action), characters and many of the actors.

But despite the promising setup and some fine acting, last year’s show suffered from “often-clunky expository dialogue and a sketchy script that devotes insufficient attention to dramatizing (verbally or otherwise) the radio actors’ jaded attitudes,” as I wrote in ArtsWatch. “To achieve the density of humor required for true comic combustion, the too-long show needs more slam-bang comic moments … jokes and physical comedy, and less tedious traversal of the familiar original Capra lines, which the audience already knows well enough.”

And that’s exactly what this year’s Miracle on 43rd Street delivers. Shedding much of the holiday cinema classic’s plot development and minimizing exposition (until, unfortunately, the end), Palmer’s sly script leaves hardly any dead spots and packs so much hilarious action into each section of this three-ring circus that there’s always something funny going on. The trick is knowing where to look at a given moment. If everyone’s laughing and you’re not, you’re gazing at the wrong part of the stage. The only real solution is to see it twice. And you should, because Miracle on 43rd Street is the funniest — and most fun — new holiday show I’ve seen in years. 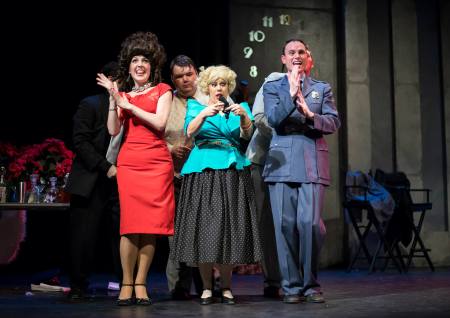 Bursting with boob jokes, queen jokes (it’s worth pointing out that the author is proudly gay) and above all corpse jokes, most of the comedy is physical. The new subplot’s hostage situation and the characters’ need to maintain the radio audience’s (though not the theater audience’s) unawareness of it — that is, between their need to tell the familiar story of the movie and the unpredictable chaos going on around it — supplies plentiful comic tension .

You needn’t remember the original film well or at all to enjoy this new seasonal delight, which is extremely loosely based on Lux Radio Theatre’s 1948 live broadcast of Miracle on 34th Street. However, it wouldn’t hurt to have seen a lot of other movies (Airplane!, Weekend at Bernie’s, Young Frankenstein, Bullets Over Broadway, Dr. Strangelove and probably others lost in the avalanche of laughter that accompanied the opening night performance) to catch some of the references that drew the most laughs.

Credit for the enthusiastic response goes to Palmer’s bustling script, astute direction, and his ebullient cast’s high-energy, nearly exhausting performances. All display the strong chemistry characteristic of B&B’s regular company. Jessica Geffen perkily reprised last year’s role as cheerily clueless Lana North-Berkshire-Whiteside, and this year’s show benefits from more sparing appearances of the shrill Bronx accent and mammary humor that goosed both productions along. Clara Hillier’s Felicity Fay Fitzpatrick upstages almost everyone (as she intends) with outrageous drama queenery and overdramatic gestures. And speaking of queening around, Jeremy Sloan’s Gilroy Gildersleeve’s fey cop gets most of the funniest lines — and deliciously dishes them with Liberace-like camp.

Even though those three turn in some of the funniest physical comedy I’ve seen lately on Oregon stages, it’s no slam at them — or at Gary Sloan, Chase Fulton and Luke Armstrong, who also excel despite their comic opportunities being limited by their roles as straight man or plot device — to note that they’re eclipsed by a dead guy. Branden McFarland’s Peter Paulson, the unfortunate station sound effects guy, spends most of the play growing ever more rigorously mortis, yet nevertheless is the star of the show — with ample assistance from his co-stars. To say more about his role, or the plot itself, would give away too many of the surprises that keep B&B’s Miracle so blessedly brilliant.

In fact, the show’s only drawback is that it ends — not once, but several times, dissipating some of the momentum fueled by the near constant laughter by trying to wrap up too many threads at the end. And as those of us fiddling with ribbons and bows all know, wrapping and unwrapping is the most tiresome part of an otherwise rewarding holiday. But the slight stumble across the finish line hardly negates the hilarity that preceded it. Whether you’ve seen the movie or not, whether you go gaga over Santa and the rest of the seasonal ho ho hokum or not, anyone who needs a good laugh at this most solemn/depressing time of year — and don’t we all? — should make the pilgrimage to Hillsboro to catch this Miracle.