‘Our Country’s Good’: drama in the penal colony

The opening scenes of Bag&Baggage Productions’ Our Country’s Good take place behind backlit screens set up on either side of the stage at Hillsboro’s Venetian Theater. Brutal, carnal, and penal, those Platonic (fore)shadows suggest that theater’s contrivances can reveal deeper truths about people and history than literal portrayals. That’s the conceit of theater, of art itself, and this production, which runs through May 31, makes a strong case for theater’s revelatory power. 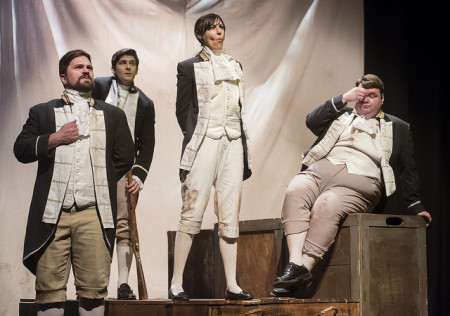 Timberlake Wertenbaker’s play-within-a play, set in late 18th century Australia, tells the semi-fictional story of a British Royal Marine prison guard regiment that allows convicts to stage the first play ever performed in that province, during its original incarnation as a penal colony that allowed the Brits to rid themselves of criminals and other lower-class unfortunates whom the ruling elite judged undesirables. The British military governor’s idealistic (for its time) goal is to use theater as a kind of artistic cure for the prisoners sins. But by the end of B&B’s gripping performance, which is masterfully directed by Scott Palmer, it’s the soldiers and the audience who achieve the greater enlightenment – and a visceral, unexpected emotional catharsis. The events that follow affirm the notion that the play’s the thing wherein we’ll catch the conscience of the king, though in a different way than Shakespeare suggested.

B&B’s version of Our Country’s Good is several levels removed from the actual events that transpired in 18th century Australia and are its original source material. The story shifts to Thomas Keneally’s novel The Playmaker, based on that history; Wertenbaker’s award-winning 1988 play that Keneally’s novel inspired; and finally, Palmer’s production. What we experience in the Venetian is the story of a young British Army lieutenant, Ralph Clark (played by Andrew Beck, who seemingly had to endure a surgical implantation that initially makes him appear the very embodiment of stick-up-his-ass pompous officer), who’s volunteered to direct an evidently stiff Restoration comedy, George Farquhar’s 1706 The Recruiting Officer, acted by the convicts his troops are guarding.

Clark’s motives are initially self-serving: he wants to curry favor with his commander. Like those who run arts-in-prison programs today, Captain Philip explains to Clark his hopes that performing in the play will provide a model for his prisoners’ rehabilitation. It’s the play’s first sign that its initial portrayal of the soldiers as cold, brutal occupiers is incomplete. We’ll soon learn that so is the soldiers’ view of the convicts.

One storyline depicts the conflict between idealistic officers who want to save these noble savages (Rousseau is explicitly invoked) of the criminal class via culture and modeling good behavior, and their colleagues, who see brutality as the only way to impose order on criminals. Already resentful at being assigned to the Empire’s harsh backwater as punishment (or so they believe) for losing the American Revolution, the latter group see the comedy, which lightly spoofs upper-class manners and authority figures, as a threat to their control, in an isolated land where reinforcements and help of any kind might be months or years away.

OCG’s military characters represent the spectrum of the soldiers’ attitude toward their prisoners, from Colin Wood’s cruel Major Ross to Luke Armstrong’s guilt-ridden Midshipman Harry Brewer (who agonizes about having carried out Philip’s order to execute young prisoners caught stealing food) to Captain Philip himself, who embodies his Empire’s moral ambiguity, capable of flogging or even killing prisoners for minor infractions as well as trying to save them. 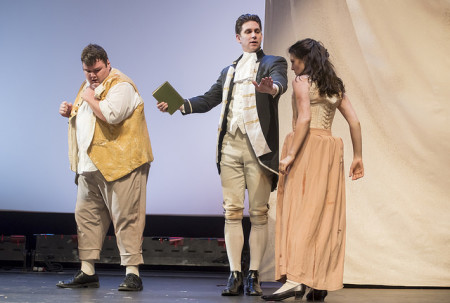 In working closely with his amateur actors over several months of rehearsal during which he must cross class barriers to transform ruffians into thespians, Clark — and the audience — soon learn to see the inmates as complex people rather than stereotypical evildoers, thanks to the play’s gradual revelation of their pre-transport back stories and their actions in the colony itself. Their crimes, we learn, range from petty thievery to being Jewish, or female, at the wrong place at the wrong time. They’re even capable of falling in love, with each other – and with the soldiers who guard them.

Palmer presents this absorbing story in a series of brief, taut chapters (each preceded by more shadow-screen action, accompanied by the actors repetitively chanting chapter titles) that push the pace, while risking losing continuity. For the most part, the strategy pays off brilliantly, the brisk tempo keeping the audience mesmerized throughout the two and a half hour run time. But the brief scenes force the play to rely heavily on the actors to convey the kind of emotional depth that ordinarily unfolds in longer scenes. Bag&Baggage’s resident actors, who’ve developed a powerful chemistry with each other and with Palmer over the years, rise to the challenge, creating a sense of sympathy and identification through the strong, distinctive characterization that’s a hallmark of B&B productions.

With twenty roles but only ten actors, each must double, playing one character from the top of the power pyramid and another at the bottom. The doubling whiplashes cast members through a wrenching series of character switches that they pull off almost flawlessly, especially given the emotional range the play covers – from humor (wannabe actors making their pitches to be part of the production) to an immensely poignant scene in which an amateur hangman measures a woman for the noose that will kill her. Palmer adeptly uses subtle physical and vocal exaggeration to make each a little larger than life, reinforcing the notion that the colony is itself a giant stage upon which these soldiers and convicts are re-enacting British class conflicts.

The compelling characterizations also compensate for the lack of textural depth that a different kind of production would convey with incidental music or more elaborate scenery and props. This surprisingly spare one effectively keeps the focus on the people rather than their historical setting. And that emphasis pays off: what could have been merely a historical morality play blossoms into an emotionally moving, at times heart-wrenching drama. 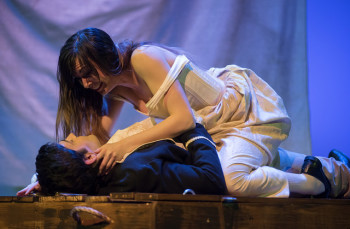 Because this production is really a group triumph, I’m reluctant to single out individual actors. But Strong, Schuyler, Clara-Liis Hillier, Ross, and Cassie Greer as the victimized Duckling (“I wish I was dead,” she says. “At least when you’re dead you’re free.”) excel. Yet really, every actor offered multiple moments of real power in what has to be one of the strongest across-the-board ensemble performances I’ve seen this year.

Still, even their best efforts can’t supply all the missing pieces. Not having read Keneally’s novel, I’m not sure where to pin the blame for Our Country’s Good’s occasional flaws — the novel, the script, or this production. But whatever the source, the prisoners seem a bit too good to be true; while many transported convicts were no doubt guilty of little more than poverty, some were doubtless rough characters, and it would have made the soldiers’ eventual transition to compassion feel braver and harder-earned had we seen more of that rough side. (Portland nice is a common problem in Portland plays that call for darker dimensions.) Clark’s transition from uptight snob to sympathetic director seems a tad abrupt; I craved one more scene that dramatized his shift in perspective. Some storylines and characters (like the underwritten Malagasy and aboriginal characters ably portrayed by Damaris Webb) still suffer from gaps that even superior acting and directing can’t quite fill in.

But none of those flaws impedes our enjoyment of this mostly terrific play and Bag&Baggage’s irresistible production, both of which offer ample testament to the ability of theater — an art form founded on artifice — to tell us deeper truths than reality can manage.

Bag&Baggage Productions’ Our Country’s Good plays at The Venetian, 253 E. Main Street, in Hillsboro. Showtimes are Thursday, Friday and Saturday evenings at 7:30 and Sunday matinees at 2, through May 31. Tickets available online and at boxoffice@bagnbaggage.org or 503 345 9590.