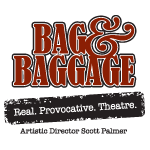 Bag&Baggage’s 2012-13 season starts with a highly stylized Kabuki Titus; moves to California for John Steinbeck’s Of Mice and Men; scampers to merrie olde England for The Farndale Avenue Housing Estate Town Women’s Guild Dramatic Society’s Production of “A Christmas Carol”; gets cozy with the Comic Knight Sir John Falstaff in The Merry Wives of Windsor; and, finally, splashes into Tom Stoppard’s Rough Crossing.

Bag&Baggage’s seasons follow a regular schedule, including an outdoor performance of a Shakespeare classic in July, a classic of American theatre in September, a holiday show in December, a major adaptation of Shakespeare in March and an English classic in May. The 2012-2013 Season will be different, according to Scott Palmer, Artistic Director.

“This year, for the first time, we are expanding our season to include a sixth production. Our audiences have been telling us that they want more opportunities to see professional theatre, and we have listened,” Palmer said. “Given that this will be our fifth season, we just knew that we had to do something special, so we have added a new show to the line-up.”
Kabuki Titus, by William Shakespeare, adapted and directed by Scott Palmer

First performed in July of 2002, Scott Palmer’s powerful and haunting adaptation of Shakespeare’s bloodiest tragedy has been called “a fascinating and striking performance” by The Scotsman, and “a playing style powerfully fitting to this awesome tale” by the Edinburgh Guide. Using Japanese Kabuki-influenced movement and dance techniques accompanied by an original score by Tylor Neist of Red Sneaker Chamber Orchestra, the performance will star former Oregon Ballet Theatre principal dancer, Anne Mueller as Lavinia, daughter of the Roman general Titus Andronicus. This is a once-in-a-lifetime opportunity to see one of Palmer’s most moving, evocative and powerful adaptations of Shakespeare. A US premiere.

Of Mice and Men, by John Steinbeck, directed by Scott Palmer

As powerful today as when it was first produced on Broadway in 1937, Of Mice and Men is a moving, heart-wrenching and profoundly beautiful tale of love, friendship and struggle. One of the great classics of American literature AND a great classic of the American stage! George and Lenny, and their haunting friendship, are at the heart of this timely tale of two men struggling to live in the dustbowl of California during the Great Depression. Directed by Artistic Director Scott Palmer with designs by Gregory Pulver, our version promises to be both visually and emotionally stunning!

The genteel English ladies from Farndale Avenue’s Dramatic Society are world-renowned for their complete incompetence, and their production of “A Christmas Carol” is likely to be their worst (and funniest) yet! Think Downton Abbey meets The Three Stooges…in drag! A disaster prone stage manager, collapsing scenery and hysterical in-fighting amongst the cast help make this truly unique show truly “HILARIOUS!” Farndale Avenue will never be the same, and you’ll never think of Tiny Tim and the Ghosts of Christmas the same way, either!

The Merry Wives of Windsor, or the Amorous Adventures of the Comical Knight Sir John Falstaff, by William Shakespeare, adapted by John Dennis, further adaptation by Scott Palmer. Directed by Scott Palmer.

John Dennis (a relatively unknown playwright from the Restoration period) wrote his adaptation of Merry Wives in 1647…Only one copy of the script still exists, and Bag&Baggage has found it! Artistic Director Scott Palmer has combined Shakespeare’s classic romantic romp with Dennis’ trimmed down, fast paced adaptation, added a few of his own surprises, and created our very own world premiere: The Merry Wives of Windsor or the Amorous Adventures of the Comical Knight Sir John Falstaff ! Starring Gary Strong (Sir Toby Belch from Bag&Baggage’s 2010 hit Twelfth Night) as Falstaff, and Arianne Jacques, Cassie Greer and Megan Carver as the women who love to hate him.

The co-authors, composer and cast of a musical comedy destined for Broadway are trying to both rehearse and finish writing the play while onboard a transatlantic ocean liner. But when the lead actress is caught in a “compromising” situation, the author refuses to finish the play! Tom Stoppard’s unique and hilarious play is a fast paced, hysterical adaptation of Ferenc Molnar’s classic farce, The Play at the Castle. This will be a Bag&Baggage take on a wonderfully witty and insightful adaptation of one of the world’s best known comedies by one of the world‘s greatest modern playwrights.

PLUS A BONUS PLAY

The Velveteen Rabbit, by Marjorie Williams, Adapted by David Jenkins

Runs weekday matinees only during the December 2012 Hillsboro school break.

The Velveteen Rabbit is one of the most beloved children’s books ever written. First published in 1922 and written by Margery Williams, it is the story of how love can make all things possible! Bag&Baggage is delighted to present a world premiere adaptation by B&B patron David Jenkins, offered in weekday matinees only during the December school break. Starring many of your favorite B&B performers, this show promises to be a holiday experience the whole family can treasure!